SYRACUSE, NY - SEPTEMBER 21: Tommy DeVito #13 of the Syracuse Orange carries the ball for a touchdown during the second quarter against the Western Michigan Broncos at the Carrier Dome on September 21, 2019 in Syracuse, New York. (Photo by Brett Carlsen/Getty Images)

The Syracuse football squad finally lived up to the Orange is the New Fast billing. Here are all the details and highlights after this offensive thriller.

Syracuse football is known for its offensive prowess and finally, it answered the call in Week 4. Although Western Michigan didn’t make it easy on Saturday afternoon by any stretch of the imagination. Here’s how it all played out with the full details and highlights from start to finish.

The Western Michigan Broncos won the toss and deferred, which was a poor choice. You never want to give the home crowd a chance to get into it and that’s exactly what happened.

It only took the Orange four plays to go 81 yards down the field highlighted by a 60-yard read-option run by none other than Tommy DeVito. Who said this man couldn’t run?

An interesting storyline in this game was that of Western Michigan two-way player No. 7 Dee Eskridge. If you remember in the matchup last year which was the season opener for the Orange, Eskridge lit up the Syracuse defense: 8 receptions for 240 yards and two touchdowns with most of that coming in the second half.

In the offseason, the Broncos switched D’Wayne to the defensive side of the ball thinking he had a better shot at the pros.

Which seemed like a major win for the Orange, especially considering heading into this game Eskridge only had one reception for 20 yards on the season.

To start off the game for the Broncos, they immediately went to No. 7 early and often on their first drive.

Which resulted in a highlight 43-yard completion where Dee showed off his 4.32 speed. Unfortunately, on the tackle, he was injured and had to be helped off the field.

Ultimately the injury stalled the WMU offense and had a turnover on downs a few plays later.

Right before the game started Syracuse was dealt some more adversity with two of their defensive studs ruled out due to injury (Andre Cisco and Ifeatu Melifonwu).

To combat those losses, Syracuse ran a lot more 4-3 defensive concepts which got freshman linebacker Mikel Jones on the field more and he brought energy early.

Speaking of doing some unique concepts, that also translated over to the offense.

time to make things happen. Some of that is due to injuries, starting center Sam Heckel missed his third straight game forcing the rest of the line to shift around.

To combat that vs Western Michigan, Syracuse did a good job of plugging Chris Elmore (6-foot, 295 pounds) in the backfield to help in pass protection.

Another thing that desperately needed help was the red zone play-calling by Dino Babers, vs Clemson it was atrocious.

In the opening quarter vs Western Michigan on third and medium, DeVito fakes the sweep and does a shovel pass to Aaron Hackett who walks untouched into the endzone to give Syracuse a 14-0 lead with under six minutes remaining.

Just when it looked like the Broncos were about to put their first points on the board on a wildcat direct snap to LeVante Bellamy he dove for the endzone and lost the ball and Syracuse snagged it for the touchback.

The Orange took advantage a few series later as Tommy DeVito displays his wheels again for the 36-yard read-option to put Syracuse up 21 to nothing.

While defensively we haven’t heard a lot from this duo so far this season, they finally broke through. Alton Robinson used a tomahawk to get a strip-sack while his brother in arms Kendall Coleman got the recovery to give the Syracuse offense another chance in the first half. 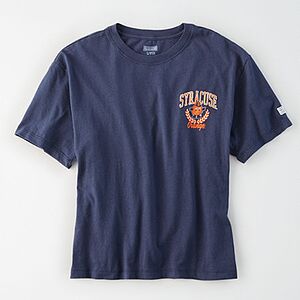 Syracuse looked like they were on the verge of putting the foot on the throat of the Broncos, but after a few negative plays the Orange were forced to punt.

On the ensuing drive, the Broncos got on the board for the first time to make it 21-7 with under 9:10 remaining in the second quarter. LeVante Bellamy went 47 yards to the house. He has sub 4.3 40 yard speed per Western Michigan Athletics.

When the momentum monster comes to play, he’s hard to kill off.

Syracuse went with a shotgun sweep play to the right side of the formation and Moe Neal who could never handle it and the Broncos took over inside SU’s 30-yard line.

The Orange defense pushed WMU to the limit, but on 4th and goal from the two-yard line, Giovanni Ricci caught the touchdown pass on the motion play. The Broncos missed the ensuing extra point making it a 21-13 ballgame.

An injury to monitor, No. 64 Ryan Alexander was shaken up at the end of the first half. He needed help coming off of the field. Which adds another injury to a plagued unit so far, instead of doing any more musical chairs on the offensive line, it was a straight substitution for junior Patrick Davis.

These two squads have only played one other time in history, in the 2018 season opener. After handling the Broncos in the first half, WMU scored 28 points in the third quarter last season.

Syracuse wasn’t as dominant in the first half as they were in 2018, only leading 24-13 in this second matchup in the loud house.

Western Michigan got the opening kickoff and was moving and grooving down the field, but the bend but don’t break Orange defense did just enough to force the punt.

Syracuse needed a spark offensively and they finally got it. Tommy DeVito stepped up in the pocket and delivered a 59-yard beauty to Trishton Jackson for the long touchdown putting Syracuse up 31-13.

This is what Orange fans were so excited about in 2018: the LIVE arm of Tommy that could electrify the dome.

Orange is the New Fast: that was the third scoring drive in under 90 seconds, per the team.

Speaking of fast, LeVante Bellamy once again made the Orange defense pay with his speed. 43-yards later he was in the endzone and the Broncos refused to bow out in the third quarter. They did not convert the two-point conversion making it a 31-19 lead.

Syracuse didn’t waste much time to respond, going on a methodical five-play drive finished off by Trishton Jackson who caught the bubble pass shook off a few defenders and took it to the house from 46 yards out. That made it 38-19 halfway through the third quarter.

Hopefully, you took the over in this game because this turned into an old school shootout in the steamy loud house on Saturday afternoon.

WMU fired back with a weird long 60-yard touchdown reception by Jaylen Hall to make it a 12 point game with under six minutes remaining (38-26).

The lack of defense considering WMU’s most explosive weapon got hurt at the beginning of the game isn’t a ringing endorsement for the Brian Ward show.

Overall this game is one of the strangest in recent memory for the Orange. So much back and forth with the momentum jumping on either side. After Syracuse gets a running into the kicker call, they are gifted a first down. Then Abdul Adams gets stripped and the Broncos take back over.

On top of all the weird back and forth plays back and forth, a slew of injuries were sprinkled in on top of this one. Late in the third quarter, Antwan Cordy got roughed up but was able to walk off the field under his own power.

Cordy was getting extra reps in this game due to the surprising injury news of Cisco, Melifonwu being ruled out for the game.

The Broncos took advantage and ran into the left corner of the endzone to make it an uncomfortable five-point lead for the Orange 38-33 near the end of the third quarter.

There’s no other way to slice it, the Syracuse defense was getting pushed around vs Western Michigan which should send red flags up through the stratosphere. But when it mattered most with under 11 minutes remaining, the Syracuse defense stuffed the Broncos on 4th and 1 from their own side of the field.

That led to Syracuse methodically chewing up some clock and punching it into the endzone to extend the lead back to 12. Aaron Hackett had himself a bit of a coming-out party in this one. The not often used tight end got his second touchdown reception of the afternoon with under nine minutes remaining.

With the Broncos driving, the Syracuse defense once again was called upon and they delivered with a critical fourth-down opportunity in their territory. Syracuse took over on their own 28 with a 45-33 lead with under seven minutes remaining.

Up next for the Orange is another home game vs Holy Cross at noon in the loud house on Saturday, September 28.