ATLANTA, GA - FEBRUARY 03: Referee John Perry in action in the second half during Super Bowl LIII at Mercedes-Benz Stadium on February 3, 2019 in Atlanta, Georgia. (Photo by Kevin C. Cox/Getty Images)

The Syracuse Strong needed a goal-line stand to continue their undefeated season. Here’s the full recap and how it all played out on Saturday.

The weather in Syracuse can be very weird and that’s been the case the entirety of this summer season.

Although in the heart of July we witnessed an absolute scorcher with temperatures surging in the 90s between the Syracuse Strong and the Monroe County Sting.

Both teams entered the gridiron undefeated and Syracuse Strong team president Khalid Bey said it best prior to the game, “One of these zeroes has got to go.”

Throughout the season the Strong have faced every team’s best shot. After gaining a ton of notoriety in their National Championship season in 2018, every team wants to be the one to knock them off in 2019.

Some teams are willing to get a win by any means necessary.

When the Strong arrived in Rochester, New York ahead of their scheduled matchup with the Sting they were met with some troubling factors that were beyond their control:

This delay also featured the absence of the National Anthem, which is traditionally played before the game starts.

Instead of simply ignoring this factoid and just playing the game, the Syracuse Strong players took it upon themselves to sing it:

With no National Anthem available, the @StrongSyracuse decided to sing their own anthem. We salute you America! #Strong pic.twitter.com/722Rvmu5xv

Throughout the game, you could hear the jawing back and forth among the players in this one.

It was an absolute defensive grind back and forth until Monroe County struck first in the first quarter with a great pass in double coverage to get the touchdown and the 6-0 lead.

The score seemed to wake up the Strong as they responded in the second quarter with several highlight plays starting with No. 80 Keison Cannon who caught a pass over the middle and hurdled a man, much to the delight of the Strong sideline.

No. 8 Rashad Burns punctuated the drive with a vintage touchdown run that featured multiple broken tackles and Syracuse took their first lead of the game 7-6.

Despite the success of that play, the Strong offensive line struggled in this one allowing their quarterback Jason Boltus to take a lot of unnecessary hits.

That constant pressure on the quarterback really kept Monroe County in this game throughout.

Although before the half ended, the Strong added one more score to pad the lead (13-6) thanks to a touchdown reception from No. 16 Aaron Smith.

To start the second half the Sting went on a 10+ play drive and meticulously worked the ball down the field and on fourth down seemingly hit a touchdown in the back left endzone, but the Monroe County receiver only got one foot inbounds and it was a turnover on downs.

The Strong defense stepped up every time they were called upon, really executed the bend but don’t break defense.

On the other side, Syracuse milked the rest of the third quarter and had an opportunity for a long

touchdown to No. 7 LaQuan ‘LA’ Rouse, but the Sting defensive back was called for pass interference. 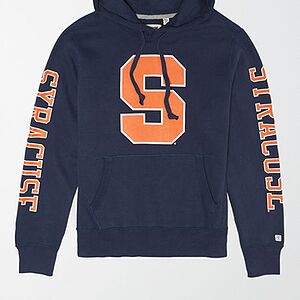 After some more trading back and forth we experienced some foreshadowing in the fourth quarter. With Monroe County driving the ball down the field, they encountered a fourth and one play, they attempted the quarterback sneak up the middle and it was unsuccessful.

Fast-forward to the final drive of the game, Syracuse is still up a touchdown, but Monroe County had its sights on overtime, or perhaps even a touchdown and two-point conversion to win it.

The Sting threw a pass over the middle in the red-zone and it looked like it was a touchdown on fourth down, but the officials called it just short of the goal-line, but enough for a first down.

Just when it looked like overtime was going to happen, on the very next play the Sting decides not to go under center and instead go shotgun. The snap skips low ricochets in the air and the Strong jump on top of it.

Throughout the game, the Sting had overcome some terrible snaps and the ball always seemed to bounce in the right place, until the moment they needed it most.

The Strong got possession and ran out the waning moments left in the game.

Syracuse escapes with a victory by the hair on their chinny chin chin. At the end of the day, a win is a win and they aren’t all going to come via blowouts no matter how good you’re.

Up next the Strong will continue their efforts on the road vs the Ithaca Warriors. Syracuse only has four games left before the league playoffs start on September 7.