Syracuse Basketball: Non-conference slate may hurt Orange in 2019-20 by Neil Adler
Syracuse Strong: DL Scott Irons has best game of season in Week 8 vs Auburn by Paul A. Esden Jr.

The Syracuse Strong defeated the Auburn Pride in a chippy Week 8 performance. Here’s why a few players were ejected and how it all played out.

Two players were ejected, five turnovers combined between both teams, and an inordinate amount of injuries; here’s how it all went down between the Syracuse Strong and the Auburn Pride in Week 8.

The definition of a ‘rivalry’ according to the Merriam Webster dictionary is a competition between two persons or groups that tries to defeat or be more successful than the other.

Technically speaking the Syracuse Strong doesn’t have any rivals. To have a rival, there have to be some wins traded back and forth between two teams and well quite frankly Syracuse hasn’t lost to ANYONE on a consistent basis. But if any team could be labeled the Strong’s rival it would be the Auburn Pride.

One of the main reasons for that is all the switching of players back and forth.

When a team wins as often as the Strong does it means that they’re very talented. When that happens, there isn’t usually a lot of additional playing time to go around. So you’ll see players switch teams in minor league football to try and find a better role/opportunity.

Barksdale who was actually on the Strong roster earlier this season. But not every player who left the Strong did so on great terms and thus there was some underlying tension afoot.

The animosity was palpable at the Valley Sports Complex and that translated to the game.

On the field, it was a super competitive defensive grind through much of the first half. But Syracuse was dealing with some obvious adversity in the first quarter with their starting quarterback Jason Boltus.

Midway through the first quarter Syracuse slapped WR Zavon Watkins into the game at quarterback which wasn’t unusual. Watkins is the team’s primary backup quarterback and offensive coordinator James Tyler has utilized these wildcat packages before to mix things up.

But then Jason didn’t return to the game until the second quarter. Although credit Jason even with him battling the injury bug, every time Zavon came to the sideline after a bad play, you could see Boltus putting on his coaching hat and helping out the young player.

Jason did end up returning to the game and sparked the Syracuse offense, but he wasn’t responsible for the first points of the contest. Linebacker EJ Maeweather seized an opportunity on third and long to create a sack/safety to put Syracuse up 2-0 with four minutes remaining in the second quarter.

Which leads us to our next serving of sloppy joes.

This game featured so many turnovers back and forth:

Some of them you could understand and some of them were just dumb. But the turnovers weren’t the worst of it. Two Syracuse Strong players were ejected from the game in the first-half: No. 25 KJ White hit a Pride WR in the head/shoulder area on a diving play and the officials ruled that it was targeting. It was a close call and from the booth appeared to be a shoulder hit, but nonetheless, he was ejected. 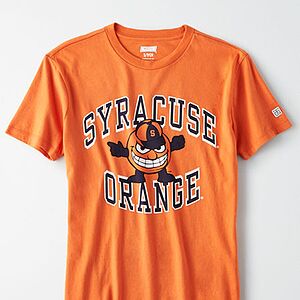 The second ejection was not up for debate.

With Boltus back in the game in the second quarter, he helped orchestrate a methodical touchdown drive right before the first half was about to expire.

After Zavon Watkins scored his touchdown to put the Strong up 8-0 he immediately got in a member of the Pride’s face in the end zone. Flags couldn’t come out of the official’s pockets fast enough.

In a game that was incredibly chippy and with emotions running high, the refs had no choice but to toss Watkins from the game.

This was a huge loss for a variety of reasons for Syracuse:

–        Jason Boltus was hurt earlier in the game and Watkins is the only quarterback with experience on the roster thus putting Syracuse in a precarious position in the second half.

–        Also, Zavon contributes in so many different ways as an athlete:

o   Receiving: three receptions for 33 yards and a touchdown.

–        His versatility was certainly missed in the second half and his emotions clearly got the best of him during the ejection.

The gameplan was easier said than done from the Pride: stop all-pro running back Rashad Burns. Auburn isn’t the first team to try this, but they were one of the most effective at it this season.

Consider this: Burns had a game earlier this season where he ran for over 300 yards and scored six touchdowns. In the first half, he was held to three carries for just five yards.

Syracuse continued to grind in the second half until Rashad finally broke through and nearly took it to the house on a 54-yard burst up the middle. With the Strong at the two-yard line everyone at the Valley Sports Complex knew the play call, hand the ball to Rashad.

Yet Syracuse fooled everyone with the read-option keeper by Jason Boltus which extended the Strong lead to 14-0.

The lead seemed pretty secure with 10 minutes remaining, but the Strong finished off Auburn with two big plays: No. 5 Ishmiek ‘Loodie’ Allen came up with his second interception of the day giving the Syracuse offense a short field to work with, Boltus didn’t disappoint.

The final nail in the coffin came via a 43-yard touchdown pass from Jason to one of his favorite targets No. 7 LaQuan Rouse, better known around these parts as “LA”. Rouse caught the ball and did most of the work with some YAC (yards after the catch and some contact) as he glided into the end zone.

Not only did Syracuse extend their undefeated streak, but they also came away with their first trophy of the season. The award reads, “Route 5 Ruckus: Syracuse vs Auburn”, whoever wins the annual battle between Syracuse and Auburn holds the trophy.

For the second straight year, the Strong reigned supreme.

Up next the Syracuse Strong will take the road vs the Monroe County Sting for the first of back-to-back road games over the next two weeks.