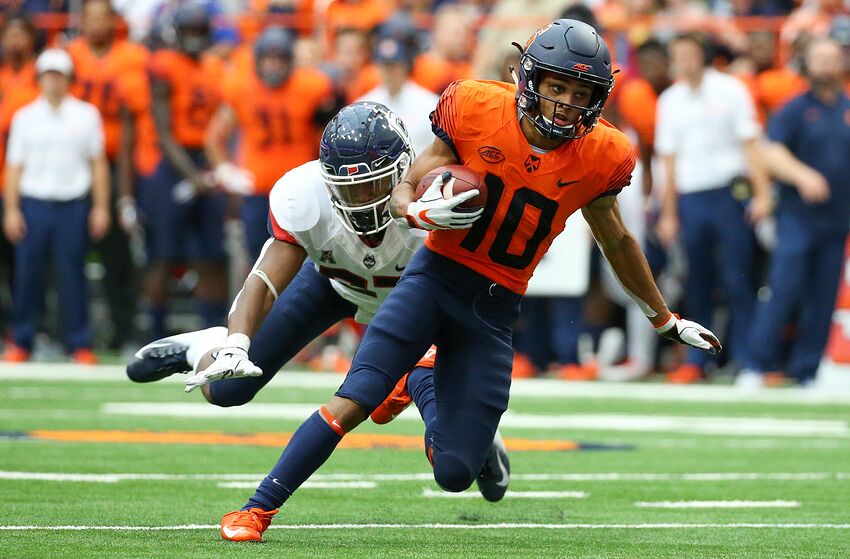 In the middle of a thrilling shootout between Western Michigan and Syracuse football on Saturday came some history being broken.

Syracuse football wideout Sean Riley is now the all-time leader in kickoff returns and kickoff return yardage, per the University.

After the game Riley went to social media to share his thoughts on making history:

“Thankful for the opportunity and thank you to everyone who’s blocked for me on kick return let’s finish this season out the right way Go Orange.”

Riley came to Syracuse as an athlete, not sure what his position would ultimately be on the Orange.

In high school, Sean excelled as a running back and put up some intriguing numbers as a receiver as well.

As a freshman he saw action in all 12 games and led all of college football in kickoff return yardage, that’s one way to make a statement. In that same season, he also set new single-season records both at Syracuse and in the conference.

In his sophomore season, Sean took more of a role in the offense while still maintaining all of his responsibilities on special teams. Also was named to the All-ACC Academic Team.

While in 2018, Sean Riley had a career-year as a junior. Played in every game (13) and started 12 of them at slot receiver. Sean led the team in all-purpose yards (1,424) and averaged a record-breaking 13.8 yards on each of his all-purpose plays. That’s the second-highest figure in program history.

Heading into his senior season expectations have never been higher.

College football guru Phil Steele had Sean listed as one of the best punt returners in the country heading into 2019. When we spoke with him prior to the season, he strongly believed that Riley could be playing football on Sundays with another strong campaign.

Sean Riley has aspirations to play football professionally. When he first arrived on the hill at 5-foot-8, 178 pounds I’m not sure how many folks gave him a legitimate shot of making that dream into a reality. Yet here he is starring for the Syracuse football team.